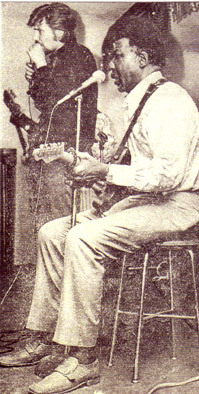 One afternoon, I was hanging out across the street with guitarist Pee Wee Madison. This woman came home from work, and I said 'Hey, Barbara, what's happenin?' Next thing you know this guy comes out of the doorway and says, 'This is for you bitch!' Boom! Shot her right in the head. At first I thought it was like a cap gun or blanks or something like that. But then she sorta swirled down real slowly and her feet started kickin' up. Pee Wee looked at me and shook his head. I said, 'Goddamn!'

The guy that shot her was still standin' there, so I ran across into Muddy's house. Now I don't know what Pee Wee did. He might've just stood there. But I told Muddy, 'some guy just shot this woman!' Muddy was real cool. He just called 911 or whatever the number you called in Chicago was back then, and said, 'there's been a murder over here on Lake Park. You'd better send the police.' Then Muddy put a pistol in his waist band and walked out by his front fence and said, 'this motherfucker don't scare anybody.' The guy who shot the woman kept yelling and waving his pistol. The police came and they locked him up.

They say the woman didn't die. And the guy got out after six months and ended up being killed by the cops. The funny thing was that about two weeks before the shooting, I was drinking with this guy. He loaned me a water glass, y' know, an ordinary ten cent water glass. But Pee Wee kept saying, 'Make sure you give him back his glass.' He must have known the guy was crazy."