"The year was 1968, before Martin Luther King was assassinated, before the Watts and Chicago riots. The country was in turmoil, fighting the Vietnam War and the war for Civil Rights in the South. The times were changing.

I was riding in a Volkswagen van traveling on a winding highway somwhere near Tupelo, Mississippi with Otis Spann, S.P. Leary, Sammy Lawhorn and Bo the driver. Luther "Georgia Boy Snake" Johnson was driving the lead car, a station wagon, with Little Sonny Wimberly riding shotgun. Muddy Waters was relaxing in the rear seat. Everyone in the band carried a gun. 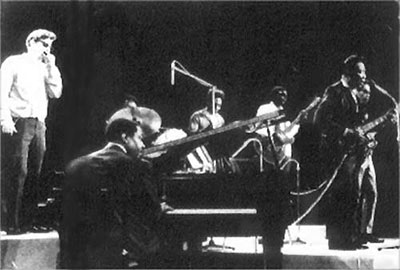 As the band entered the town, a large railroad-sized billboard of a hooded KKK nightrider on a white stallion, reared up on its hind legs, greeted the band. The sign had a caption below it: "BEWARE, YOU ARE NOW ENTERING KLAN COUNTRY."

Everyone in the band saw the sign. No one spoke."